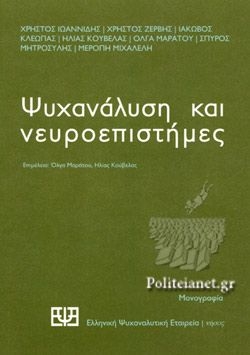 The book presented here consists of a monograph comprised of a collection of seven papers authored by seven senior-teaching psychoanalysts, whose common ground is reflection and contemplation in order to discuss similarities, differences and overlaps between two major disciplines of mental health perception. Those of Psychoanalysis and Neuroscience.

I consider this book as having multiple reading levels. One is that of the referral to fundamental psychoanalytic concepts. This is done in a way in which these concepts are clarified, enriched, or even renewed. One other level is that of refreshing our memory concerning neurology and brain function through recent discoveries derived from modern methods of imaging of the nervous system function. A third level is a comparative study between certain important elements of these two disciplines. A comparison that brings to light relevancies, connections, analogies and also differences in the way that these systems of thought and practice view human nature and the environment (cosmos) that humans inhabit. Through this process, priorities and functional particularities are detected, and DIALOGUE and the acceptance of difference are promoted.

A fourth, meta-level might be inspected by a reader trained in Systemic point of view which is a view based on general systems theory, communicational theory and cybernetics. A level where another comparison is inevitable. That between some systemic perceptions about human condition and psychoanalytic approach. Concepts such as 'network', 'autopoiesis'. 'co-construction', together with 'inter-subjectivity' and 'plasticity' make their pronounced appearance in the psychoanalytic language of this book. Concern regarding discrimination or choice between dualism and monism in the way the human condition and its relation with the world are recognised tempts us to seek shelter in a 'holistic-relational' approach. Discrimination between the 'outer' and the 'inner' concerning the human frame urges us to refer to concepts such as 'constant interaction', where A changes B to the degree that B changes A. At the same time, psychoanalysis protects us from losing the sight of human frame as the essential unit of individuality (as a subject) and as the presupposition of relating to others. Simultaneously, neuroscience keeps us in contact with the material essence of relating, offering us unquestionable imaging of the course of perceived experience through neuronal network and brain centers. We can now trace and record chemical alteration in neuronal synapses provoked by certain external stimuli. Alteration that through the nervous system's proven regenerative power, entitles us to look forward to biological alterations through psychotherapeutic practice. We are at the age where Sigmund Freud would feel justified about his wish and prediction that the transformational and regenerative power of psychoanalysis (and its psychotherapeutical revisions) will be biologically proven. I think that every psychotherapeutic approach has reasons to celebrate neuroscience's recent achievements just the same as every dogmatic proponent of biologism has reasons to mourn.

All seven papers are special as well as complementary. They are mentioned below in the order in which they appear:

I believe that this book – with its essential, cohesive and unpretentious style of writing - is addressed to all mental health specialists regardless of the approach they are trained in or their clinical experience. It covers issues of clinical implementations and theoretical clarifications of psychoanalysis, of the nervous system's functioning, as well as philosophical extensions concerning existential angst and psychotherapeutic meaning making. Issues that in one way or another concern most mental health specialists. It comprises a reason for valuable reflection on interconnectedness and dialogue between all mental health approaches in theory and practice. It is a statement about widening our viewpoints and reconciliation with the 'different other'.