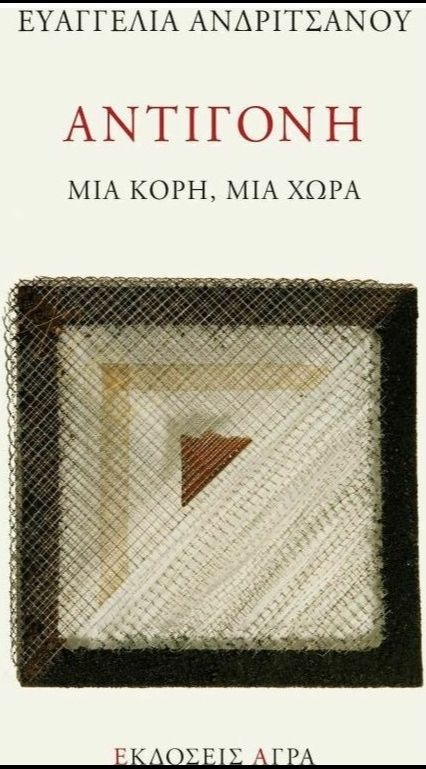 "ARE YOU READY TO SPEAK, RED HORSE? (IF YOU SPEAK, WILL YOUR VOICE BE HEARD?)" It is the Daughter speaking in Evangelia Andritsanou’s third poetry book Antigone. A Daughter, a Land, a direct reference to the stage poem The Red Horse Animation by American theatre director and poet Lee Breuer (1939-2021). The first of a trilogy of Animations, The Red Horse is a fable about the quest for a personal identity and the ways in which art can be used as a vehicle for the discovery of personal identity and the creation of a new self-narrative of life.

"I GO THROUGH MY CHANGES. FORWARDS. AND BACKWARDS. SOONER. OR LATER. I’LL COME TO WHERE I AM. I THINK. I’LL COME TO MYSELF," muses Lee Breuer’s alter ego in The Red Horse Animation, whose first performance at the Guggenheim Museum in New York City in November 1970 made theatre history. And in her introduction to the printed text, Bonnie Marranca writes: "These fables… work to demystify stereotypical attitudes about malehood."

Conversely, in her book Andritsanou reflects on femininity, on the roles of woman, mother, daughter1, on memory and our origins, on exile as well as on the nature of writing and creativity. "Lexeis," which means words in Greek, are of feminine gender, and it comes as no surprise that they breed more words. They give birth to poetry and after a 10-year gestation period Andritsanou’s Antigone was finally born.

"No reader comes to this Antigone fully uninformed and innocent," Thanos Kappas aptly points out in his book review2, "no reader can hear Antigone’s name without a series of vague trains of thought regarding her character and stance, her plight and her passion; a daughter – a glance, a stance – a land."

And Maria Yiayiannou defines Andritsanou’s Antigone as a flowing and yet fragmented poem3. It was the exact feeling I had as I was reading the book, that of a rushing unstoppable current carrying not just words, but also sensations, rustling sounds, images, smells and flavors.

Two voices on facing pages open the long poem. They stand many centuries apart: on the left page the Daughter, a young woman of our times and on the right Antigone, Oedipus’ daughter, the mythical archetype. At times converging, at times diverging, these two voices complement each other and may gradually be thought of as one person. The mythical Antigone is thrown into an underground cell for having tried to bury her brother Polyneices. As for the Daughter, our contemporary, she is the prisoner of inertia. Her first statement in capital letters jumpstarts the narrative, feigning realism:

"SUBMERGED IN IDLENESS. I SIT AT MY DESK, I STAND UP, I GO GET A GLASS OF WATER. I READ THE NEWS, RANDOMLY, AND I PLAY SOLITAIRE. MY MOUTH IS BITTER."

On the opposite page, in the isolation of her prison, Antigone filled with desire evokes her love for Haemon: "Love/I can never have enough… Take Haemon/…/thinking of him/ makes me go up in flames/ sleeping becomes irrelevant/eating – irrelevant/…/ Your hands touching me softly/your fingers lighter than the feather of a lark…"

The two voices coexist through the entire book, juxtaposing the world of the past and the world of today, an antithesis which also functions as a synthesis.

The book is structured into three parts and an Epilogue.

The first part discusses confinement. On the one hand Antigone, brimming with life despite her incarceration: "Hello desire, /I own you!/Thrown in my dry tomb/I crave/still /and forever//I will go on/being//and being a woman//above the earth/or buried in it". On the other end of the continuum, the Daughter asks herself: "HOW CAN YOU BE SO CERTAIN THAT WOMEN NEVER SURRENDER? THAT THEY INVARIABLY FIND A WAY TO FLEE WHOEVER ATTEMPTS TO FENCE THEM IN? NO, THIS IS WRONG. OR A LIE. THE PRISON IS VERY SOLID, WALLS WITHIN WALLS WITHIN WALLS. CUTTING EDGE SECURITY SYSTEMS, NO PRISON GUARDS, ONLY CULTIVATED INTERLOCUTORS WEAVING AN INESCAPABLE, INVISIBLE NET. PERHAPS MY MOTHER WAS NAÏVE, AFTER ALL."

The second and third parts of the book evoke the past and the events that brought about Antigone’s imprisonment.

War and fratricide are the main focus of the second part.

"The man who solved the riddle/the man who never backed off//A stone wall/insurmountable//My brothers needed to cut loose/or stay and be crushed//Like you by Creon, your father"

"The instant the cry of victory got to us/ I was carrying/ an armful of squashes, carrots,/ some bitter greens /our garden’s scarce produce// …/ that victory was meant for others/ and defeat was always meant for us.//… / But your other son, Mother?// Fallen outside the city walls naked alone—/ what is left of my brother?/ …// My Father was crushed by time – no/ not time, life – no/ not life, my Mother – no, no,/ not my Mother, his Mother – no, no/ his Father first, who in turn was –/No, no

"Because the past is coming down like a swollen river/ its waters swirling with/ the heartache of first love/ and the triumph of the first disobedience/ with children’s shoes and combs and dolls,/tight-braided strands of hair,/ with bedsheets stained with blood, / axes and currycombs,/ with calloused hands and/ flushed cheeks/ bruised/ by violent fingers"

The Epilogue achieves a conciliating integration for both the Daughter and Antigone.

Andritsanou’s Antigone is a continual oscillation between two poles: love and war, compliance and freedom of choice, fiction and reality, the world of yesterday and the world of today.

The book also reflects the interminable comings and goings between reading and writing – writing as a path towards freedom, as an intellectual trip in the quest of a word powerful enough to touch and unlock. We are what we write and conversely, our writing material stems from what we are – "Madame Bovary c’est moi", as Flaubert famously said. The struggle to write is an attempt at discovering oneself, it is a means to tell one’s own history and experience, as well as an occasion to reflect on the writing process itself. The Greek novelist Evgenia Fakinou has said that it is one thing to write "the woman spent the night all by herself in an empty house away from civilization" and a completely different thing to actually spend a night all by yourself in an empty house away from civilization. This is what distinguishes artistic creation from real life. Through writing one has the possibility to transform reality, which in itself is invariably frustrating. We write in order to protect ourselves from actuality, says Greek author Yorgos Veltsos. And another Greek novelist, Michel Fais, aptly states: "Words are addressed to and invite all that which has been ignored, sidelined or frightened, in order to comfort, to soothe and console it."

Through the Daughter, Andritsanou quotes curator Dimitris Michalaros’ words from a 2014 interview about the artistic action"I Need a Hero": "THROUGH THEIR WORKS, THE ARTISTS ATTEMPT TO TRACE THE HEROIC PARADIGM AS WELL AS THE BREAKAWAY FROM IT. DRAWING ON THE RESERVOIR OF HISTORICAL MATERIAL AND THE INCOHERENCE OF HISTORICAL NARRATIVES, THEY GO ON TO SUGGEST NEW STRATIFICATIONS AIMING TO PRODUCE A CHARTING OF THE PAST, THE PRESENT AND THE FUTURE."However, as much as the Daughter craves to be able to follow her Mother’s (Antigone’s?) heroic model, she stumbles on words and can go no further.

Writing is a two-way process, tightly woven with reading. As we read Evangelia Andritsanou’s "Antigone", we discover in Antigone’s words and in her way of looking at things parts of ourselves and of our individual and collective history. It is impossible to tell one’s own story without using the words of others and without placing it in the context of a collective history.

The author informs us that she began writing "Antigone. A Daughter, a Land" in 2011 amidst the social unrest of the Greek financial crisis and that she completed it in 2020. Some snapshots of those times and the ensuing socio-political situation can be found in its pages, such as the careless euphoria that preceded the crisis, the Neonazi gangs, the refugees streaming in from the Middle East wars, the refugee camps, the environmental disasters.

"ON THE BODY. THIS IS WHERE THE FURROWS OF HISTORY ENGRAVE THEMSELVES. TO BURY THE BODY. TO NOT BURY THE ACT. TO UPHOLD THE MEMORY OF THE ACT, SO THAT NOONE CAN PRETEND NOT TO SEE. (SOME WILL INVARIABLY PRETEND AND MANY WILL FORGET.)"

Fiction is a continual stimulation of memory, an interminable reawakening of the mnemonic material we carry inside us. Andritsanou’s Antigone is in mourning for what happened back then in her country and for all that which, unfortunately, happens again in our times, confirming the repetitiveness of historical patterns.

To write is to reinvent our childhood, according to internationally renowned Greek novelist Zyranna Zateli. Perhaps through writing the author recovers lost time, like Proust.Here the Daughter’s final words reveal a similar intention by Andritsanou: "I NEED TO PART WITH MY MOTHER’S MEMORY, THE MEMORY OF A TOUCH, A SMELL. THE MEMORY OF A VOICE THAT WOULD LEAVE ITS MARK ON MY SKIN. AT TIMES CARESSING, AT TIMES FLOGGING. IT’S TIME FOR ME TO TAKE THE PATH NO ONE HAS EVER TRODDEN BEFORE ME AND TO NEVER LOOK BACK."

Couldn’t these same words be used to denote the completion of a psychotherapeutic journey? Psychologist Terri Apter in her book Difficult Mothers, (which, coincidentally, was translated into Greek by Evangelia Andritsanou) says: "Release comes from… the enlightenment that our battle is no longer between ourselves and a mother but between the history that formed us and our better possible self."4

Writing and creativity allow us, as does psychotherapy, to come to terms with trauma and loss, to revisit the locations and the ways of childhood and to tread newfound internal paths, helping us assuage our fears and anxieties and derive the courage to start on new personal journeys. George Seferis’ famous quote "They are children of many people,our words" illustrates how we begin by using other people’s words, which we gradually get to master, until we are able to use our own words.

"Oh home, my home,/ oh corners that I’ve sniffed and touched,/ nooks where I’ve hid/ shadows that flogged my daydreams/ doors and windows wide open,/ and gusts of fresh air/ that would sweep all rage and grief/ and hold sickness and fear away./ Oh, floors so delightfully cool/ when my desire was burning/ and smooth pillows that always/ welcomed my sorrows/ oh, my bedroom balcony// And oh, sea// rousing and sultry like Haemon/ scarred with underwater currents like Polyneices/ fair and indulgent like my sister/ bridled by blunt ambition like Eteocles// raging and unstoppable like Mother// blind, absurd, towering like my Father// Oh, my home/ my city/ my land// one golden ray of sun/ and you are shattered."

Endings can only be brought about by being put into words, by going through language, Euripides claims in "The Suppliants". A language that is presented to us at birth in order to promote separation, resolve the symbiotic child-mother relationship and leave transitional space for thought. Evangelia Andritsanou’s poetics in this book offers the reader just this: transitional space for thinking and daydreaming.